Fes, Morocco: Eating with a local 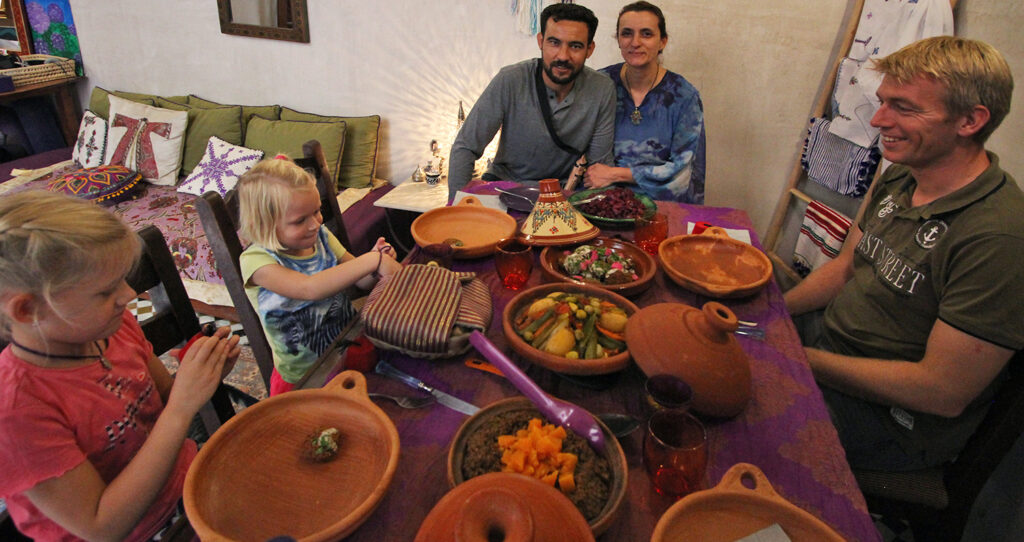 We like to experience a city, region, or country through the eyes of a local. So, after spending a morning wandering in Fes, we meet up with Sahar. She moved from Marrakesh to Fes a couple of months ago. Her new house is in the center of the medina. Today, we will have lunch together. And we are curious how that will be like.

The house of Sahar and her husband is called a Dar. A traditional Moroccan house of four stages. The stages go from a large kitchen area in the basement all way up to a rooftop terrace. Decorations and ornaments are present everywhere. The colorful pattern on the tiles and in the windows create a beautiful and distinct Moroccan atmosphere. Immediately, we feel at home in this house.

First, we drink some tea in the living room. It’s typical Moroccan to serve your guest’s tea. Later on, we go downstairs and into the kitchen. It smells delicious. Sahar started cooking early, and the flavors of a tagine on the stove tickle our noses. The food needs only a final touch. We watch Sahar preparing a salad and adding a sauce to the falafel. The light is only coming from above and gives all a cozy impression.

We have been eating at locals before, for example in India. Mayor difference today is that Sahar and her husband take place at the table too. So, eating at locals becomes eating with locals, which we find more pleasant. During lunch, we talk about Marrakesh and the way it changes by tourism. Unlike Fes, which remains more authentic.

Unfortunately, the restaurants in Fes adjust the food to western standards. Opposite to the way Sahar cooks. The food has a delicious flavor from many spices, and Sahar uses pure and fresh products. Veggie-cooking is the specialty of Sahar. There are 6 (!!!) dishes on the table. Needless to say, we don’t miss out on the meat at all.

After a few hours, we think it’s time to go. But Sahar doesn’t let us go yet. There’s a dessert waiting for us. My two girls love this pink treat. We would love to see the sunset from Borj Nord. Sahar insists on walking us through the medina, showing us the best way in the small streets. She tells us, she loves the city. We can imagine that! We ourselves have a wonderful feeling about Fes now we’ve seen it through Sahar’s eyes during this special meeting. 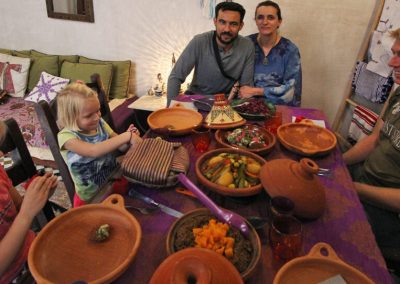 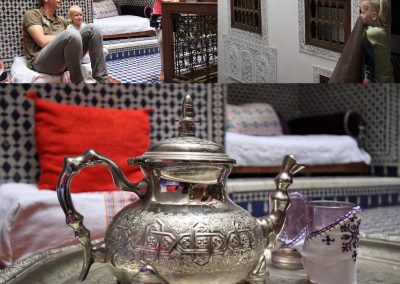 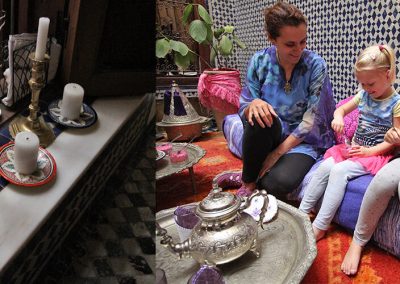 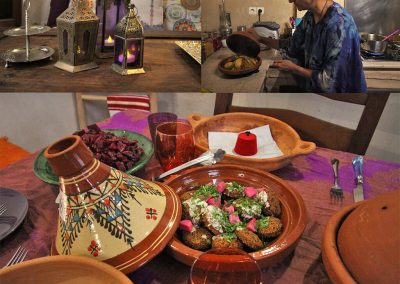 Yvonne travels the world with her husband and kids. Always searching for the best local experiences, supporting sustainable travel. You can read more of Yvonne in her travel blog posts, and look at her stunning travel pictures too!

We use cookies on our website to give you the most relevant experience by remembering your preferences and repeat visits. By clicking “Accept”, you consent to the use of ALL the cookies.
Cookie settingsACCEPT
Manage consent

This website uses cookies to improve your experience while you navigate through the website. Out of these, the cookies that are categorized as necessary are stored on your browser as they are essential for the working of basic functionalities of the website. We also use third-party cookies that help us analyze and understand how you use this website. These cookies will be stored in your browser only with your consent. You also have the option to opt-out of these cookies. But opting out of some of these cookies may affect your browsing experience.
Necessary Always Enabled
Necessary cookies are absolutely essential for the website to function properly. These cookies ensure basic functionalities and security features of the website, anonymously.
Functional
Functional cookies help to perform certain functionalities like sharing the content of the website on social media platforms, collect feedbacks, and other third-party features.
Performance
Performance cookies are used to understand and analyze the key performance indexes of the website which helps in delivering a better user experience for the visitors.
Analytics
Analytical cookies are used to understand how visitors interact with the website. These cookies help provide information on metrics the number of visitors, bounce rate, traffic source, etc.
Advertisement
Advertisement cookies are used to provide visitors with relevant ads and marketing campaigns. These cookies track visitors across websites and collect information to provide customized ads.
Others
Other uncategorized cookies are those that are being analyzed and have not been classified into a category as yet.
SAVE & ACCEPT